You are here: Home / Traveling Exhibits 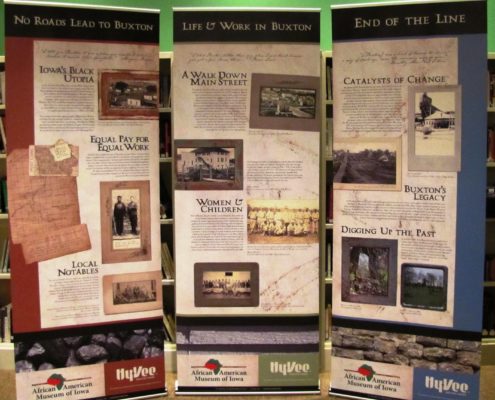 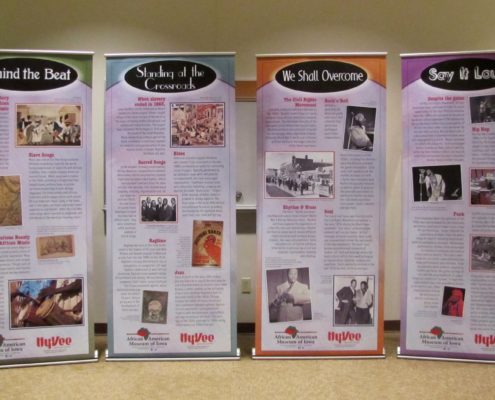 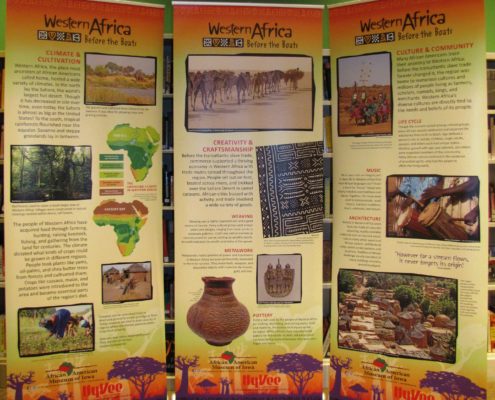 Find a traveling exhibit to fit your needs and interests.

Learn about African American military heroes and heroines from the Revolutionary War to today. Topics include Iowa’s 60th U.S. Colored Troops from the Civil War, the Buffalo Soldiers, women in the military, World War I training camps in Iowa, and the Tuskegee Airmen.

Gain insight into the life of acclaimed scientist George Washington Carver. Follow along from his days as a student at Simpson College and Iowa State University to his groundbreaking work with soybeans, sweet potatoes, peanuts, and other crops at Tuskegee Institute in Alabama.

Riding the Freedom Train: The Underground Railroad in Iowa

Follow Iowa’s Underground Railroad routes and read stories about the safe houses, communities, and brave individuals who took their lives in their hands on a journey to freedom.

Explore the struggles and triumphs of the fight for equal rights. Featured individuals include Alexander Clark, the man who helped desegregate Iowa schools in 1868, and Edna Griffin, the woman who led sit-ins at the Katz Drugstore in Des Moines in 1948.

Uncover what it’s like to be an African American in Iowa through stories and photographs from everyday Iowans and famous residents. This traveling exhibit is based on a 2012 exhibit presented by the AAMI and the Johnson County Historical Society.

Western Africa: Before the Boats

Investigate climate and agriculture, craftsmanship, and culture in 1500s and 1600s Western Africa through a traveling exhibit that answers the question “What was Africa like before the transatlantic slave trade?”

No Roads Lead to Buxton

Step back in time to Buxton, an early 20th century coal-mining town once referred to as “the black man’s utopia in Iowa.” Buxton, which existed for only two decades at the turn of the century, was one of the few communities in Iowa’s history with a majority African American population.

Explores the development of African American music from its roots in Africa to modern-day hip-hop. This exhibit is based on the AAMI’s 2014-2015 temporary exhibit.

Products of a Creative Mind

Get to know African American inventors and innovators who have impacted the ways we eat, move, live, and stay healthy. This exhibit is based on the AAMI’s 2015-2016 temporary exhibit.

How Do Traveling Exhibits Work?

Traveling exhibits are available to schools, libraries, museums, organizations and businesses across Iowa.

You may borrow a traveling exhibit for up to two weeks (14 consecutive days). This includes pickup, drop-off, and shipping, unless otherwise stated by the museum. The AAMI may shorten the leasing period due to availability, prior requests, and/or availability of transport/delivery. All reservations are on a first-come, first-served basis.

The borrower is liable for all costs relating to damages incurred during the leasing period. If there are any damages beyond normal wear and tear, you’ll be notified and billed for the cost of repairs.

Instructions are provided in the rental contract.