Dr. Simon Estes will be the Lifetime Achievement Honoree at our annual History Makers Gala on October 3. Get your tickets today to be part of this special event. 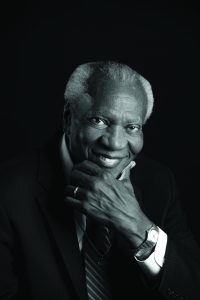 Born in Centerville, Iowa, in 1932, Dr. Simon Estes first singing experience came at age eight when he performed with the choir in Centerville’s Second Baptist Church. From those humble roots, Dr. Estes would become one of his generation’s greatest bass-baritones.

After enrolling at the University of Iowa in the late 1950s as a pre-med and psychology major, Dr. Estes became the first African American member of the university’s Old Gold Singers. His voice caught the attention of Iowa music faculty member Charles Kellis, Estes’ first and only vocal teacher.

Dr. Estes won the Bronze Medal in Moscow’s Tchaikovsky competition in 1966 and it signaled the launch of his international career. He would go on to build a global reputation and win numerous awards and accolades while performing with 84 of the major international opera companies as well as 115 orchestras around the world. He also advocated for more opportunities in opera for African-American performers.

Even as Estes achieved stardom on stage, he helped others in Iowa and elsewhere through many philanthropic efforts. He has also inspired new generations as a teacher at music schools around the world including Wartburg College, Iowa State University, the University of Iowa, and Des Moines Area Community College, all in Iowa.

Learn more about Dr. Estes work on LinkedIn and Twitter.