“Jumping Jack to Jump Jim Crow: The Origins of a Pernicious Stereotype?” 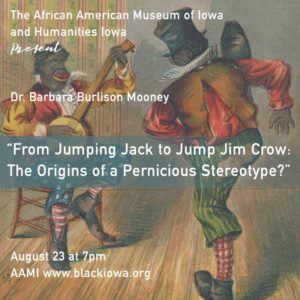 “Jumping Jack to Jump Jim Crow: The Origins of a Pernicious Stereotype?” Join Dr. Barbara Mooney as she discusses this American racial stereotype.

The African American Museum of Iowa

This event is FREE and open to the public, as part of Humanities Iowa Presentations.

As the Southern author, William Faulkner, famously said in one of his novels “the past is never dead. It’s not even past.” The historical legacy of slavery still haunts our nation, and not just in the South. Disparaging images of African-American male slaves have had a particularly corrosive influence over American culture and continues well into twentieth-first century. Mooney’s lecture addresses a part of that difficult history by examining the painful evolution of the imagery of the black male slave as a happy buffoon in early American popular visual culture. She argues that early minstrelsy stereotypes need to be understood within the context of broader culture, specifically European popular visual culture that engaged with jocular, movable figures, such as the French moveable puppet known as a pantin. Examples of this pernicious American racial stereotype include illustrations on musical scores, tobacco labels, newspaper illustrations, and children’s toys. Those attending this lecture will witness very uncomfortable imagery, but Mooney is committed firmly to the idea that the historical roots of racism need to be unearthed and confronted if they ever can be overcome.