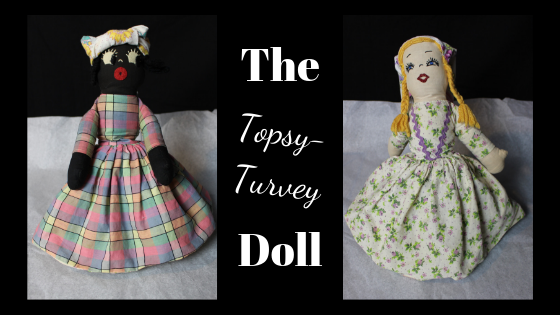 This article by Curator Felicite Wolfe was originally published in the Summer 2017 edition of the Iowa Griot, the AAMI’s member publication.

A unique piece of folk art with an uncertain past, the Topsy-Turvy doll has become subject to debate and controversy among historians. In its simplest form, the doll has two heads with their upper bodies on opposite ends, joined together at the hips. A long skirt flips to conceal one face or the other. It is two dolls, but only one can be played with at a time. Traditionally, Topsy-Turvy dolls are made of cloth with one side representing a white girl and the other a black girl. Often, the white doll is more detailed while the black doll wears a dress void of adornment or the apron and headscarf of a “mammy” figure. Many historians agree that the doll originated in the antebellum period of the American South and were handmade by enslaved women. But who played with the dolls and why? 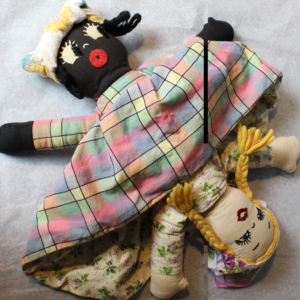 There are many interpretations that have evolved regarding the meaning and use of these dolls. Debra Britt, one of the founders of the National Black Doll Museum, believes that the dolls enabled enslaved children to have something forbidden—a doll that looked like them. When the slave master was present, the child could easily switch the doll to the white girl side.

African American Studies scholar Dr. Kimberly Wallace-Sanders admonishes this theory, believing that enslaved mothers wouldn’t jeopardize their children in that manner. She theorizes that the doll may have been a socialization tool for both enslaved black girls and white masters’ daughters. The doll could have been a means for the young girls to understand their role in society and as women. Black girls may have desired a white doll, possibly like the children their mother looked after. White girls may have viewed the black figure as a “Mammy” or maid of the house. In Mammy: A Century of Race, Gender, and Southern Memory, Dr. Wallace-Sanders states “African American slave women may have given dolls like these to their daughters as a preparation for a possibility of a life devoted to nurturing two babies: one black and one white. Topsy-turvy dolls are designed for children to play with one baby at a time, and this accurately reflects the division of caregiving that African American women encountered, having to care for white children during the day and their own children at night.”

Dr. Wallace-Sanders’ theory is supported by several others. Author and game designer Bernie De Koven states that toys are typically instructional and connected with learning about people. The doll therefore probably mimicked the dynamics within the household. In historian Dorothy A. Mays’ book Women in Early America: Struggle, Survival and Freedom in a New World, she notes that “slave girls were often paired with the similarly aged daughters of their owner to be companion and servant.

By the late 19th century, Topsy-Turvy dolls were being mass produced, some with lithographed or hand-painted faces. Topsy and Eva double headed dolls, based on characters in Harriet Beecher Stowe’s novel Uncle Tom ’s Cabin were popular in the 1940s. Sewing patterns were produced by Vogart and Redlines with the name “Topsy and Eva Doll.” In a McCalls pattern, both dolls were white and called the “Upside Down Doll.”

In contemporary times, the Topsy-Turvy doll continues to spark discussion and debate and has come to be viewed as a symbol of conflict, power struggle, segregation, gender roles, and racial and cultural tensions.