In light of the June 17, 2020 news that the Aunt Jemima brand will change it’s name and image, we are sharing this article from the Summer 2016 issue of the Iowa Griot. This article was written by Brianna Kim, who was the AAMI curator at the time of publication and now holds the position of Operations Director.

In the 19th and 20th centuries, it was not uncommon to see stereotypical depictions of African Americans in mainstream entertainment and advertising directed at white consumers. Along with the pickaninny, Uncle Tom, Sambo, and Jezebel was the Mammy. She was usually depicted as an older, large, matronly black slave or servant who spent her life happily cooking and cleaning. In the antebellum period, Mammy was used as “proof” that slaves were happy; in the Jim Crow era, a time when black women had few employment opportunities outside domestic service, she was used to justify their oppression. One of the best-known and most successful uses of the Mammy archetype in advertising was Aunt Jemima. 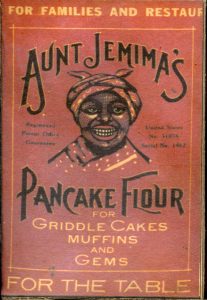 Introduced in 1889, Aunt Jemima pancake mix was the first ready-made food product sold commercially in the United States. The brand was founded by Chris Rutt and Charles Underwood of St. Joseph, Missouri. As the story goes, the product’s name was inspired by a character in a minstrel show that Rutt attended. The white man in blackface wore women’s clothes and performed the song “Old Aunt Jemima.”

When the Aunt Jemima brand was sold to R.T. Davis in 1890, he not only improved the product but decided to make Jemima a “real” person and hired Nancy Green, a former slave, to portray her. She made her debut at the 1893 World’s Fair. Quaker Oats purchased the company in 1926 and trademarked Aunt Jemima in 1937. Several other women – including Anna Robinson, Edith Wilson, Rosie Hall, Ethel Ernestine Harper, and Aylene Lewis – portrayed Aunt Jemima until the 1960s. Advertisements, targeted primarily at white women, developed a back story for the character and her secret pancake recipe. As M.M. Manring states in the book Slave in a Box: The Strange Career of Aunt Jemima, “The ads urged white housewives to have Aunt Jemima, not to be Aunt Jemima.” 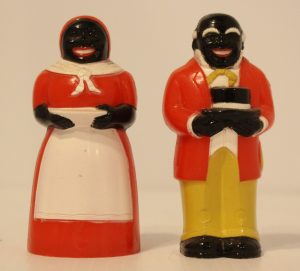 In the early to mid-20th century, the success of the Aunt Jemima brand had extended into several premiums and promotional products. The line included a set of dolls, spice shakers, and cookie jars featuring Aunt Jemima, her husband Uncle Mose, and their children.

The onset of the Civil Rights and Black Power Movements of the 1960s and 1970s sparked renewed resistance to stereotypical advertisements. “Aunt Jemima” had become an insult in the African American community, referring to a person whose actions and mindset hindered progress towards true equality.

In 1968, Aunt Jemima’s image underwent significant changes. She became slimmer and younger. Her bandanna, to many a symbol of slavery and servility, was replaced with a headband. The current image used on Aunt Jemima packaging, a smiling women with curly hair and pearl earrings, dates to 1989.

Manring, M. M. Slave in a Box: The Strange Career of Aunt Jemima. Charlottesville: U of Virginia, 1998. Print.

These items from the AAMI collection were donated by Harvey W. Dewey. In these images, you can see how stereotypical depictions of African Americans were used in the Aunt Jemima branding. These images also show how these caricatures were prevalent not only in the product packaging, but extended into household goods such as paperweights and clocks. As you look at these items, think about how it might have felt to be a young black person growing up surrounded by images like these as popular depictions of your race. 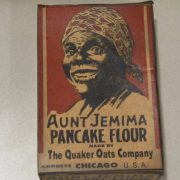 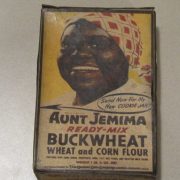 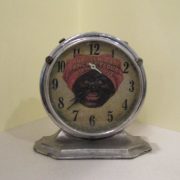 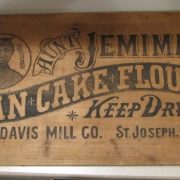 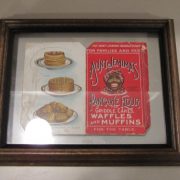 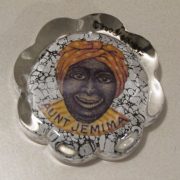 This video from the Jim Crow Museum at Ferris State University shows additional examples of how the Aunt Jemima brand has been marketed over the years, including audio clips from commercials.