You are here: Home / Juneteenth / Videos 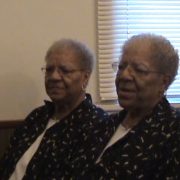 Ruth and Ruby Page were born and raised in Manly, Iowa. After high school, the twins moved to St. Paul, Minnesota, and worked in a factory during WWII packaging C-rations and waterproofing boxes. Eventually, they returned to Iowa and settled in Mason City. They married brothers, James and Willis Haddix, and have been active in their church and the NAACP. Ruth and Ruby have also won awards for being among the United States’ most identical twins. 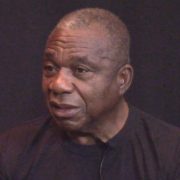 Born in Chicago, Nelson Evans came to Iowa to attend Upper Iowa University. He grew to love Cedar Rapids after visiting the Oak Hill Jackson community with fellow classmates. After graduating in 1964, Nelson was hired by the Cedar Rapids Community School District and became its first African American teacher. Over the years, he rose in the ranks of the school system from teacher to principal and finally, the Executive Director of Elementary and Secondary School Education, a position from which he retired in 1998. He was inducted into the Iowa African-American Hall of Fame in 1997.

This video is from the oral history project “Civil Rights in Linn County,” conducted in 2015 with the assistance of a grant from the Linn County Historic Preservation Commission. 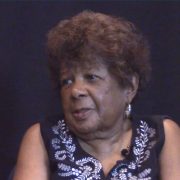 Freda Carole Blakey Long was born and raised in Cedar Rapids, Iowa. Freda initially wanted to be a nurse, but her parents could not afford to send her to school. She decided instead to become a beautician. After she was denied admission to the Paris Academy in downtown Cedar Rapids due to her race, she worked at Armstrong’s Department store to save money to attend at Crescent Beauty School in Des Moines. She graduated in 1955 and took her first job at Thelma Price’s shop on the 800 block of 8th Avenue SE in Cedar Rapids Iowa. She married barber Robert “Bob” Long and raised three children. Freda is still active at her shop, “Freda’s Beauty Rama and Gift Shop,” on 12th Avenue SE, where she has mentored many beauticians and barbers.

This video is from the oral history project “Civil Rights in Linn County,” conducted in 2015 with the assistance of a grant from the Linn County Historic Preservation Commission. 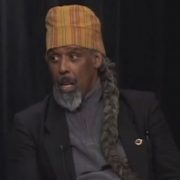 Socially and politically motivated since his youth in Waterloo, Tony Brown has been a force in music and social change. In the 1960s, his integrated Reggae band introduced the idea of diversity in music and people to many Iowa communities. Throughout the years, he has been involved in several organizations including the NAACP and the Black Panther Party. No matter where he has lived, Brown is active in motivating others to better their lives, expand their outlook and perspective, and improve their community. Along the way, his music has earned him a large fan base and induction into the Iowa Rock and Roll Hall of Fame in 2008 and the Iowa Music Hall of Fame in 2002. 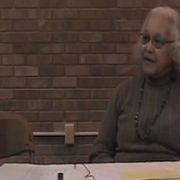 Lileah Furgerson Harris was born in Waterloo, Iowa, the daughter of the city’s first black physician and one of its first black educators.  She attended Iowa State Teachers College (now the University of Northern Iowa) in 1948 and two years later married Percy G. Harris.  The Harrises settled in Cedar Rapids in 1957, and Lileah became an active community member. She served on numerous education and civic boards. In 1993, she fulfilled a lifelong goal, graduating with a degree in Russian from the University of Iowa. Lileah viewed her service and volunteerism as an avenue for improving opportunities for African Americans and ensuring justice for all people. 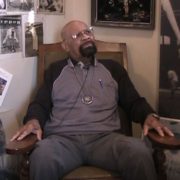 Art Pennington was born in Memphis, Tennessee. In 1940, at the age of 17, he signed with the Chicago American Giants of the Negro Leagues. Art was selected three times to play in the prestigious Negro League East/West All Star Game and played with some of baseball’s greatest players including Jackie Robinson, Satchel Paige, and Josh Gibson. In 1946, he played for teams in Mexico, Venezuela, Cuba, & the Dominican Republic that were less discriminatory than those in the United States. Art returned to the United States in 1949 to play in the minor leagues. After the 1959 season, he retired from baseball and settled in Cedar Rapids after he was hired at Collins Radio, where he worked for 25 years and played on the company baseball team.

This video is from the oral history project “The Only One,” completed in partnership with the Johnson County Historical Society in 2011 for a temporary exhibit of the same name.